July 9, 2019 the Ambassador of the Argentine Republic to the Russian Federation Mr. Ricardo E. Lagorio held the 203rd Anniversary of the Declaration of Independence of the Argentine Republic, with the Chamber of Commerce and Industry of Argentina and the Russian Federation, Embassies and Consulates from Latin America and other countries. The SUAI Vice-Rector for International Affairs Konstantin V. Losev took part in the celebration to congratulate the Ambassador on successful cooperation between Russia and Argentina in science and education.

Konstantin V. Losev also talked to the Secretary for Science, Technologies and Innovations at the Embassy of Argentina Gastón Fielli to discuss progress in cooperation between Russian and Latin American education since their last meeting in summer 2018 at SUAI. 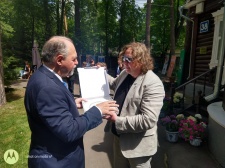